Each year it seems that there are more and more movie titles being offered in 3D. No, this is not the red and blue, plastic glasses 3D of yesteryear but rather newer generation 3D technologies. From a slew of CGI animated children's movies to action and even horror movies, there seems to be no slowing down our appetite for 3D cinema. The entertainment industry and consumer electronics giants such as Sony are betting the bank that consumers will want to bring 3D movie technology into their homes too. Samsung, Panasonic and the aforementioned Sony have all released 3D capable televisions in 2010 and Blu-ray ratified its own 3D specification meaning that HD 3D finally has arrived en masse. Industry sources trend 3D capable televisions to be commonplace in American households with the next five to ten years. 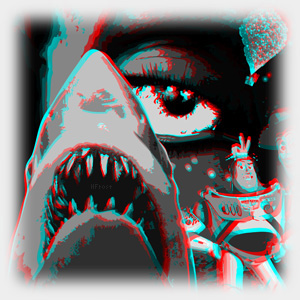 Your 3D friends from the movies are now here on your own TV.

The beginnings of 3D video can be traced back to the invention of the stereoscope by English scientist Sir Charles Wheatstone in 1838. This viewer afforded users the first glimpses of stereo photographs by the late 19th century. The first 3D film available to the public debuted in 1922 using anaglyph images. By the 1950s, analglyph 3D movies became popular with titles such as Bwana Devil, Hondo and even Alfred Hitchcock's Dial M for Murder being shot in this format. However, 3D as a video format was soon relegated to a novelty and did not resurface in Mainstream cinema until the 1980s when movies such as Jaws 3D and Friday the 13th Part 3 brought the medium back to a new generation of audiences.

The mid 1980s brought newer, polarization-based 3D technology films such as Disney's Captain EO and the IMAX 3D Transitions. Once again though, 3D quickly slipped into obscurity until brought back from the dead yet again by the recent slew of movies encompassing multiple genres such as: children's CGI, horror, action and more. This time it appears that 3D video is here to stay since for the first time, it has made the leap into live television with the World Cup and is envisioned to be the future of sporting-event television coverage.

Stereoscopy is the general method for providing a three-dimensional optical illusion with two-dimensional images. Depth perception is simulated by providing each eye with a different image of the same vision field. These two images represent the slightly differing perspective for each eye in binocular vision as caused by the distance between the eyes. Our brain naturally combines the two images into one, which we interpret as having depth. Anaglyph Color Filter 3D
This type of 3D operates by displaying two images on the screen: typically one in red and the other in blue. The glasses are used as subtractive filter and allow only one image to enter each eye. The images are combined in the brain to appear as a single black-and-white image with simulated depth. Polarized 3D
Polarized lenses improve on red/blue technology since they allow for color images. This 3D method works by displaying two separate and orthogonally polarized images on a screen. The user wears glasses where the polarization of each lens is orthogonal to the other as well. As a result, this method acts as another type of subtractive filter where the two images are combined in the brain into a single image with simulated depth. Active Shutter 3D
This latest generation 3D uses powered glasses to provide the simulated stereoscopic effect. Unlike previous technologies, active shutter glasses allow for uncompromised video quality in both color and bandwidth. In short, this means that 3D video can now be displayed in full HD quality with the right equipment.

Active glasses operate by embedding synchronized shutters within each glass lens. The two shutters are opened and closed in a staggered pattern meaning that when the left eye's shutter is open, the right shutter is fully closed allowing no visual information to pass. On the next time sample, the process is reversed. The timing of each eye's shutter opening is synchronized with a corresponding perspective image to simulate the depth field. This method of operation has two negative side effects: The refresh rate is automatically halved and with too slow of a refresh rate, the user will see image ghosting. However, the latest 3D HDTVs eliminate both of these problems by doubling the normal refresh rate to 120 Hz allowing for a full HD 3D experience.

The shutters themselves are typically constructed of LCD displays which can transform from being transparent to nearly opaque black when a control voltage is applied. The control voltage is synchronised with the alternating sequence of left and right images on the television via Bluetooth, DLP Link, IR or RF signals depending upon the equipment manufacturer.

In order to enjoy 3D video at home, consumers will have to upgrade most of their current equipment. First, a 3D capable HDTV is the obvious prerequisite. Though currently quite pricey, look for prices to tumble rapidly in the coming months with more and more 3D adopters. The next item is a 3D capable Blu-ray player. While all Blur-ray players provide HDTV resolutions, only newer players labeled as 3D capable will deliver the goods. Additionally, one should make sure that their cable/dish network box is properly outfitted for 3D operation to enjoy three-dimensional programming such as the recent World Cup. One should not forget to make sure their A/V cables are 3D capable as well. This is covered in detail in the following section. Last and perhaps most importantly, users must be willing and ready to don the less-than-stylish 3D "sunglasses" in front of family and friends.

Currently there are two main formats for transmitting 3D image data to your television: sequential and side-by-side 3D. This is not quite a format war like VHS versus Betamax in the early 1980s. Rather, each of these formats was designed to maximize the existing capabilities of their associated data transmission system.

Sequential 3D
Sequential 3D consists of a sequence of alternating video frames where each successive frame is designed to be viewed by just one eye be it left or right. For example, the first frame would be for the left eye, frame two would be for the right, frame three for the left again and so on. Such a sequence is a natural fit for active shutter 3D glasses. This format, which is driven by the Blu-ray 3D specification, allows for true 1080p 3D images for each eye. What this means though is that the video must now be transmitted at 48 frames per second (24 for each eye) to maintain HD quality. As Blu-ray discs are hardly lacking for potential data storage, this massive bandwidth is not a problem. Side-By-Side 3D
This 3D format is being pushed by DirecTV as a means to enable 3D broadcasts to be sent over existing equipment. That's right, if you are a DirecTV customer, you will only need a firmware upgrade to enable 3D transmission from your DirecTV box. However, for this to work, some signal manipulation is necessary to work with the existing bandwidth limitations. Side-by-side 3D consists of two full, horizontally-scaled images, displayed side-by-side on each video frame. These frames are transmitted at the normal HD rate of 24 frames per second. Each of these images is for the left and right eyes respectively. For 1080p broadcasts with a 16:9 aspect ratio, the left and right images will each be 960 vertical lines wide by 1080 horizontal lines in height. When the 3D TV receives a side-by-side broadcast, it first separates the left and right images from each frame, then upscales the width of each by a factor of two. Lastly, it displays the left and right images in a sequential manner as necessary for viewing with active shutter glasses. Due to the horizontal upscaling, side-by-side 3D is not as sharp as sequential 3D but as stated before allows for the use of existing equipment. DisplayPort is the computer industry's answer to HDMI and has been envisioned as a replacement for DVI. Introduced in 2006, DisplayPort is a unique, high-bandwidth digital A/V cable that can connect both internal and external displays. In 2009, DisplayPort 1.2 was released and allows for the doubled refresh rates needed to support HD 3D with higher bandwidth from the previous version 1.1a. In version 1.2, the data rate was increased from the already high 10.8 Gb/s to up to 21.6 Gb/s. Additionally, it now provides improved HD 3D support through 240 frames per second video (120 frames per second to each eye) as well as displaying the following 3D protocols: dual interface, field sequential, pixel interleaved, side by side and stacked. For more information on DisplayPort, read our November 2009 technical article. HDMI, the all-purpose, digital audio/visual cable for home entertainment, also has embraced 3D technology with its v1.4 also released in late 2009. This protocol established the necessary infrastructure to deploy 3D between cable/dish TV boxes, Blu-ray players and HDTVs. HDMI allows for a full HD 3D experience like DisplayPort with resolutions of up to 1080p all the while supporting seven-channel surround sound. Moreover, HDMI's 3D support currently covers: frame, line, or field alternative methods; side by side methods (full and half) and 2D plus depth methods. More information on HDMI v1.4, including its 3D capabilities, can be found in our April 2010 technical article.

The Future of 3D TV

Parallax Barrier Display (Glassless 3D)
In the future consumers will not need to wear glasses to enjoy 3D content thanks to rapidly improving parallax barrier technology. A parallax barrier is a thin, switchable liquid crystal layer that controls the direction of light leaving the display. When activated, a parallax barrier will transmit different frame images to each eye to enable a stereoscopic 3D image. While promising, this technology has major shortcoming in that it requires viewers to be positioned within defined viewing zones in front of the TV to experience a 3D effect. As a result, current parallax barrier displays have a very narrow viewing angle compared to normal TVs. Look for this display type on the recently unveiled Nintendo 3DS portable game console.