Surveillance cameras are being used more and more these days. They add peace of mind to the safety of one's home or business that cannot be equaled. Today we will delve into the different wiring options available for hooking up both power and video for BNC-based security cameras.

RG59 Siamese is the typical cable used to transmit video from a camera to a DVR/Multiplexer or monitor, and to provide power to the camera. It consists of a run of RG59 coaxial cable, and two 18 gauge wires. This cable combo is called Siamese because the jackets are molded together for easy installations.

RG59 coaxial cable is composed of: 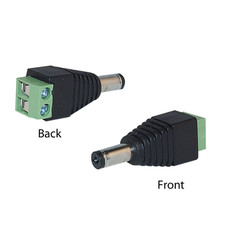 BNC connectors are crimped onto the RG59 coaxial cable to be plugged into the camera's video port. For power, some cameras have terminals to accept bare wire. Others require a connector be attached to the wires to plug into the camera. (30W1-00200 picture) The red wire is positive, and the black wire is negative.

If you only have a few runs, we carry pre-terminated cables with BNC connectors and power connectors already installed. (10B1 series with pix).

We carry a variety of power options for Siamese if you want to employ something a little cleaner than power bricks / AC adaptors. The first such option is the standard beige power distribution box. These are popular for situations where there is no rack. The box is a painted steel box and contains a simple circuit board with screw down contacts/leads and a power transformer that plugs into the wall. We offer these in 9 or 18 ports with power ranging from 12VDC/24VAC, 12VDC, 18VDC and 24VAC.

Another option is a rack mountable power supply. We currently have two options here. Both parts offer 18 ports, providing power to 18 cameras. One would split the Siamese, running the RG59 to the DVR/Multiplexer and power to the bridge. This functions similarly to the wall mounted power box but fits into a server rack unit to allow for a 'cleaner' installation in such places that allow for it. Many DVRs come with mounting brackets for rack units so you can see where this would be desirable to have both on the same rack.

Another option for wiring security cameras involves running Cat5e / Cat6 cable in combination with video baluns. Simply put, a balun in this context is a small adapter that converts the camera's video and power connections to an RJ45 Cat5e connection for running long distances. The advantages of this system include its relative economy (network wiring is often less expensive than coax / power wiring) and ease of installation. Baluns come in two flavors, "passive" and "active". Basically, the difference between the two is that passive baluns do not require their own power source (the tradeoff being, they cannot push a signal as far), while active baluns require power, but as a result can send a signal over a much greater distance.

The passive system's makeup depends largely on what you are hoping to accomplish and what capabilities you intend on having. The first step is figuring out what type of passive balun you want to use. Here at CableWholesale.com we have balun to balun and bridge to balun options. Our focus here will be on transferring power and video over Cat5e cable. There are also baluns for video only which will be discussed further on.

Let's take a look at a passive balun to balun system. First off, this means we will have a balun on each end of our cable. The camera sided balun has three connectors; network (Cat5e), power and BNC. The network plug is a standard RJ45 female socket designed to accept a standard Cat5e / Cat6 network cable. The power is merely a DC female output. It acts as a pass through for camera power. The BNC is for video from the camera. See the attached image for a simple example. One could easily expand on the diagram by linking multiple cameras in a DVR and/or Multiplexer instead of the camera to monitor example shown. It would merely require two baluns and some Cat5e cable for each camera added.

Another option which may interest those of you managing larger installs and/or those with access to a server style rack shelving system is our Power/Video Bridge to balun system. In the case of this system we are still using passive baluns; however we are only using them on the camera end. The example below illustrates an eight camera system with a DVR/multiplexor between the bridge and monitor.

This example illustrates a system with cameras, baluns, a video input and power output bridge, DVR and monitor. Let's start somewhat backwards at the monitor, and work our way out to the cameras.

Here in the CWS labs, members of our technical team decided to practice wiring up the DVR end of a system. We made use of a DVR, one power and video bridge and a Cat5e patch panel. Our intent was to illustrate a rack mountable solution. As you can see we run BNC terminated RG59 coaxial cable from the bridge to the DVR (below). This is for video connection only. Both the DVR unit and the bridge accept BNC connections on the back.

The power supply provides power to the Bridge and has an optional rack mounting plate, which is shown in the picture. It plugs into a standard three-pronged 110V outlet and can power two bridges. 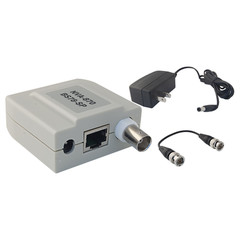 The balun converts the power and video signals back from the Cat5e cable to separate channels for the camera. Note that the power is subject to some distance limitations, determined in large part by the equipment being utilized.

Before moving forward it should be noted that outside of distance the primary difference between fully passive and active systems (including active/passive) is that power is not transmitted.

These parts feature a monitor end balun with a 24v power adapter and send power and receives video over a cat5 cable. The camera end converts the 24v power down to 12v for the camera

In the case of an active/passive system, an active balun is added to either the camera or the monitor end. Which end would likely depend on the availability of electricity at each location as active baluns do require their own power source. For an active system, an active balun is required on both the camera end and the monitor end. Both baluns in this instance do need to have a power source. In either case the camera will need a local power source as well. In order to decide upon what wire to use between the baluns one would need to consider the distances between them and the placement of the cameras. Distance is what would determine which option you went with. A fully active system can transmit up to 6000 feet and the passive/active system can transmit up to 4000 feet.

Example1:
If one was intending on having a cluster of 3 cameras, 2000 feet from the dvr/multiplexor/monitor, I would consider active baluns on the monitor end and passive on the camera side. At that distance I would strongly consider running the video feeds across a single Cat5e cable to reduce costs.

Example2:
In another hypothetical situation with a camera located 4500 feet away one would need to use two active baluns. In such an instance 22/2 may be a good option for transmitting video. In this case power would be needed for both the balun and the camera.

When one looks at a security system it quickly becomes apparent that each situation should be properly studied for environmental obstacles and user needs. While this article has tried to stick to systems composed of singular technologies this is not a cut and dried rule. There is no reason an entire system could not be comprised of all of these methods based on need. If all but one of your cameras are within 500 feet you could run all of those with passive baluns and choose to run the one longer straggler on passive/active or active baluns as needed.

Well, that's all for this month. Please note that surveillance extension is a vast and complicated topic. This article was written to introduce you to options you may not have thought about.